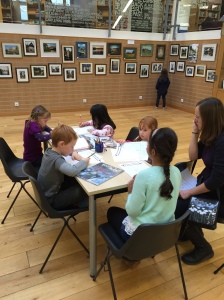 The ‘Design A Monster’ Workshop was a Halloween themed illustration workshop at Uxbridge Library. I wanted  to get the kids thinking creatively. At the start of the activity we shared ideas by drawing on a flip-chart, mixing different creatures together.They came up with new and interesting monsters by sharing ideas in front of each other and discussing what habitat they could be from and what we could call them. One child did a lovely drawing of a creature with a ducks head, The wings of a parrot, the body of a furry bear and the legs of a horse. It looked great and it was certainly original! I got them to present their horrific monsters to the group and share how they came up with their ideas. I think it was a great success and we had one girl say she ‘came up with the best creature ever!’.

This is one of the many events that Hillingdon Libraries have been running throughout the month of October all to do with Culture Bite! Our very first annual celebration of all things Arts & Culture. There has been a fantastic uptake, especially at our family events. 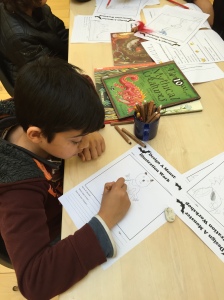 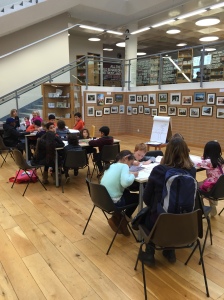 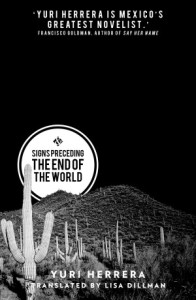 It is difficult to know how to categorise Yuji Herrera’s Signs Preceding the End of the World. The novella opens with its protagonist, the young independent woman Makina, thinking that she’s sure to die. While Makina somehow manages to scramble up the giant sink-hole and cling onto her life (with a tenaciousness that repeats throughout the novel) she looks down the precipice at “the poor soul on his way to hell.” This opening and the rather grandiose title might suggest a post-apocalyptic epic but that’s not what Signs Preceding the End of the World actually is. Instead Makina is sent into the United States (because, as her mother points out “I don’t like to send you, child, but who else can I trust it to, a man?”) to find her brother and bring him home. It’s a dangerous journey, and one that sees Makina having to work for the Mexican criminal underworld in order that she might make the illegal crossing. It’s a journey that will bring Makina face to face with death, police and guns but Makina doesn’t give up.

That said the quest isn’t really the point. It does provide the motivation for Makina but the novella resembles the novels of Raymond Chandler. To a certain extent the plot doesn’t really matter, but it’s important in allowing the central characters to express poignant thoughts about a society and culture that they don’t quite belong to. While Chandler’s Philip Marlowe novels focused on the poor detective’s cynicism about his wealthy clients, this novel allows us to see the United States through the eyes of those deemed solely as “illegal immigrants.” As a result the unnamed U.S. city that Makina finds herself in is described as containing “signs prohibiting things” that lead citizens to “see themselves as ever protected, safe, friendly, innocent, proud and intermittently bewildered, blithe, and buoyant; salt of the only earth worth knowing.” It seems that having a position outside society, or at least outside the “anglo” majority, allows a unique perspective on the strangeness of the United States. One old man that Makina meets on her quest describes baseball as a game where “one of them whacks it , then sets off like it was a trip around the world, to every one of the bases out there, you know the anglos have bases all over the world, right?” Its these odd bites of cynicism, the comparison between US foreign policy and its sporting endeavours and a later contemplation about what gay marriage means for gay identity, that are the real highlights of the book.

This is important because the quest for the brother ends rather suddenly and somewhat anticlimactically. That hardly matters in a novella where the prose is so lyrical, almost mythical, and yet the characters and the setting so contemporary and vital. And perhaps it is hybridity that is the point of this novella. This feels like a timeless epic that somehow takes place in a very real and very contemporary world, it’s a quest where the treasure at the end of it doesn’t really matter and the United States is described as a hybrid of cultures places serving food that was strange but with something familiar mixed in, something recognizable in the way the dishes were finished off.

Signs Preceding the End of the World is a remarkable book that manages to interrogate US society, reflect on immigration and creates a strong young female protagonist in just 107 pages. It is a incredible novella, and proof of just how much can be said in such a short space. 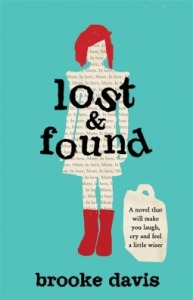 Lost and Found is the debut novel of Australian writer Brooke Davies. It centres around seven year old Millie Bird as she tries to find her mother who abandoned her in the underwear section of a department store. Along the way Millie befriends the eighty seven year old Karl “The Touch Typist,” the eighty two year old Agatha Pantha and very plastic Manny (a shop dummy). It is an unlikely cast who find a connection both through grief and adventure.

With incredible deftness Brooke Davies manages to create three very believable characters. Each one comes with their own experiences and observations about the world and Brooke revels in exploring the world from the different perspectives. Millie’s naivety and inquisitiveness allows her to ponder such things as what an old man “used each [wrinkle] for” and ask where people who are “good and bad” go to when they die. Agatha Pantha, meanwhile, keeps a diary to record details of her own aging, from 6:05 to 6:45 she sits in the “Chair of Disbelief” every day and measures “Cheek Elasticity, Distance From Nipples To Waist, Foreign Hair Growth, Wrinkle Count, Projected Wrinkle Trajectory, and Arm Wobblage.” While Agatha’s response to age, grief and loneliness is to shut herself away from the world and attempt to record it as it passes her by, Karl “The Touch Typist” is eager to finally start living. He relishes in the opportunities to be rebellious and youthful, getting into scrapes with younger men, vandalising property, stealing and being hunted by the police. In one very amusing scene Karl, who has started to imagine his life as a movie, shows considerable disappointment at not needing to jump out of a moving train because it’s stopped at a station.

The strong characters are accompanied by delicious prose. When Millie collects tea lights and uses them to decorate a tree in tribute to her father the novel turns into something of a fairy tale: “The candles in the tree gently swayed and those on the ground flickered. There were stars in the sky and now it looked like there were stars in the tree and on the ground, as if Millie had made a starry night sky out of the whole world. She stood up and strolled around her sky, wondering if her dad was doing the same, all the way up there.” It is a pivotal scene, one that Brooke Davies immediately undercuts with tragic irony, and a great example of how the novel manages to combine comedy, beauty and tragedy.

Overall Lost and Found is a delightful exploration of the universality of certain human emotions. The context for their grief and loneliness might be different, as is their way of understanding it, but all three characters feel it and all three find it easier to tackle together. This is a novel about those who get left behind and how they respond, but the colourful cast of characters gives it a lightness that makes it a heart-warming tale rather than one that becomes too overpowered by the melancholic notes that run underneath it. While Lost and Found is not without its moments of darkness it never wallows in it, instead touching upon it with a lightness of touch that makes it a thoroughly engaging read. It is definitely a book that can be found on your library book shelves! 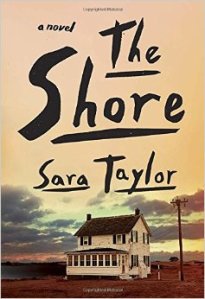 This book was first brought to my attention when it was Shortlisted for the Baileys Women’s Prize for Fiction. I immediately grabbed it off the shelf, read the blurb on the inside cover, and read page 40, a tradition I have which helps me determine whether I will enjoy a novel or not. I immediately loved Sara Taylor’s writing style and knew this was going to be a book I would enjoy.

The Shore is made up of 13 short stories, solidly linked by each story taking place on The Shore, a collection of three islands just off the coast of Virginia, and delicately through shared histories and distant family connections, you are even provided with a family tree at the front of the book. The women of The Shore are the focus in this novel, we read their stories of hardship, heartache, fear as well as their fierce resilience, strength and determination in the face of abuse, murder and misogyny.

Each story demands your attention very quickly, you remain engrossed throughout and by the end you need to know more. You then turn the page and experience a flutter of excitement for the next story!

I usually struggle with short stories, I find that there is either not enough information, or so much that the plot suffers. Taylor finds a balance between offering enough background detail and descriptions that you feel like you are on The Shore, as well as significant enough plot lines that you are drawn along effortlessly. Saying that, some aspects feel a little bit forced, some unlikely and some a little bit confusing.

My advice, if at any point you are missing a character or upset that you feel the story has just dropped off, persevere! It will be well worth it. Sara Taylor is a promising and exciting new author, I can’t wait to see what comes next from her!