As part of the Literary Challenge 2017, this time Hillingdon Library Staff review Fantasy books. Dragons, kings, magic and alternate universes. But what is Fantasy? And where does it meet Science Fiction? Can we consider Fantasy as a sub-genre of Science Fiction, or is it the other way around? Read along and find your answers.

We read and review fiction books on a set theme every month, for you.

Kurt Vonnegut has experienced a lot in his life, including having survived the bombing of Dresden during WW2. Being one of a small number of survivors made a profound impression upon him. He never felt able to talk openly about what he saw and how this terrible experience affected him personally, so he wrote a book giving him some ability to reveal and share his experiences. Billy Pilgrim, our hero, is a soldier, a prisoner, a time traveller and has been abducted by aliens known as Tralfamadorians on and off throughout his life. This surreal story is tragic, funny and enlightening. Kurt the author and Billy Pilgrim’s lives are certainly entwined. How much? We will never know as our author passed away some 10 years ago – and so it goes. Before I read Slaughterhouse-Five, I would have told you that I don’t like Sci Fi. Now? Maybe I do. I’ll always wonder if he was a genius with knowledge beyond most or a man made slightly crazy by the horrors of war. (Note: this book has been described as Science Fiction, but also as Fantasy. Where does Fantasy end and Science Fiction begin?)

5 out of 5 stars. Barbara – Ickenham Library

2. Among Others by Jo Walton

I am not a Fantasy reader so my first challenge this month was to find a fantasy novel that I felt I would be able to read! I chose ‘Among Others’ because it didn’t look too long, it was not one of a series (which so many fantasy books are) and it didn’t feature dragons! Also I particularly liked the dedication: “For all the libraries in the world, and the librarians who sit there day after day lending books to people.” This book is set in the ‘real’ world and is written in diary form. Teenager Morwenna is sent to boarding school after a car accident in which her twin sister is killed and she is injured. Morwenna is an avid reader, mainly of Sci Fi and there are many references to the books that she reads. She also sees and speaks to fairies and uses magic but at the end of the book… This book was well written but I haven’t been converted to fantasy!

3 out of 5 stars. Carol – Northwood Library

3. The Eyes of the Dragon by Stephen King

This is a Fantasy novel by the most famous of horror fiction authors. King leads the reader into a classic fantasy world -originally meant for children- filled with magic, dragons, wizards… Published in 1984, you could read it while a very 80s soundtrack plays in your earphones, or maybe just in your head. If made into a film it could have been just like Ladyhawke, with electric guitars playing alongside horseback riding scenes. One character in particular, the King’s wizard, made a great impression on me when I read ‘The Eyes of the Dragon’ for the first time as a child. One of those unforgettable characters that children meet in books. The story is rich of mysteries, evil plans, kings and princes, spells and poisons, perfect for children and teenagers, in the unmistakable style of King’s early work. In September this year Stephen King is going to be 70 and a new film adaptation of ‘It’ will be released. What better time to read his books?

3 out of 5 stars. Federico – Northwood Library 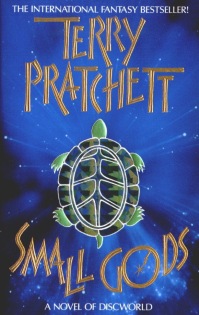 What is a fantasy writer? For me, Terry Pratchett counts, and he must surely be the funniest to have worked in the genre. Small Gods is typical – full of jokes, playful use of history, mythology and literature and much more, yet still thought-provoking on such themes as the use and misuse of power and the nature of belief. In Pratchett’s world, gods become bigger and more powerful the more people believe in them – and vice versa. Om, the god of Omnia, has been reduced to the size of a tortoise despite being surrounded by supposed believers. He is sustained by the true faith of one novice priest, Brutha, through whom he works to regain importance and incidentally combat war and tyranny. If this sounds serious, there is hardly a line without a laugh. Pratchett delights in turning cliches on their head; the Omnian inquisition kills heretics who claim the earth does NOT go round the sun. (We know they are correct to believe it is flat and carried on the back of a giant turtle…)

5 out of 5 stars. Mike – Eastcote Library

Have you read any of these books? Do you like Fantasy? Why Science Fiction has a dedicated section at Hillingdon Libraries whereas Fantasy doesn’t? You can borrow all these books from our catalogue. Thanks for reading!

Sara, 16, tells us all about her experience volunteering at Oak Farm Library this summer, to help with the Summer Reading Challenge…

I wanted to volunteer as part of the Summer Reading Challenge to enhance my work experience. I remember the thrill of the Challenge when I was in primary school. At first no one really knew what it was about. However a member of staff from the library kindly came to our school for an assembly and told us everything we needed to know and so the mission began. I remember racing my friends to see who could read the most. The Challenge was exciting and the prizes were an excellent way to keep us reading, as I always wanted to get back to the library fast to change my books and receive my prize.

Finnegan, one of the Starborg characters children collect during the Summer Reading Challenge in Hilligndon.

The reading helped with my English skills immensely, as I found my creative writing had improved. So when I heard about volunteering for the Summer Reading Challenge, I thought that it would be a great opportunity to help out as I knew what the Challenge was about and also I love working with young children. I actually enjoyed the tasks, I loved seeing the children’s faces light up when you handed them their prizes and certificates. I would see so many children returning books, taking books out, desperately trying to reach the next stage of the challenge.

Even my brother had joined and I could always hear him nagging my parents at home to go to the library each day, just so that he could return his books and receive his prize. This is what makes the Challenge so fantastic. The staff at Oak Farm were incredibly nice and were always there to help out if I was unsure about anything. The tasks I took part in were handing out gifts to the children, getting activities together and counting gifts to make sure that we did not run out. Overall I actually really enjoyed my time volunteering and would love to help out again in the future.

Organised by The Reading Agency and libraries throughout the country, the Summer Reading Challenge is aimed at encouraging children aged 4 to 11 to visit the library and read during the summer holidays.